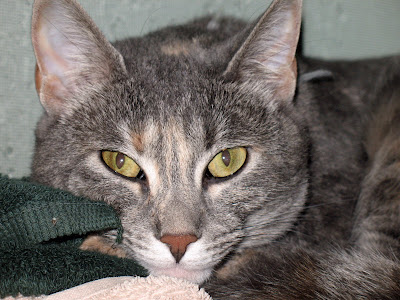 Have I mentioned that my cat, Scout, is insane? Last week, as you know, she took a flying leap off a 15-foot high railing, using up one of her 9 lives and taking a couple years off my life, too, as I watched her go over the edge. All in one fell swoop. And just now, she was curled up next to me on the bed, massaging her head against the corner of my computer. (She does this to make me feel guilty for not petting her enough -- I know it). Anyway, she accidentally hit the little button that opens the DVD drive, Scared the crap out of herself when it sprung open and knocked her upside the head. She sat up frantically, looking like, "Where are you? Who's effin with me? I can take you!"

The best Scout moment ever, though, was the night she got her head stuck in the watering can. Like so many cats, Scout will do everything she can to avoid drinking water from her actual water dish. She'll jump up on the counter to drink the water out of the dishes soaking in the sink. She has no qualms about "drinking at the bar" (a family friend's euphemism for drinking out of the toilet). And I can't even count how many half-full water glasses she's tipped over by trying to fit her ENTIRE HEAD in them. Like this: 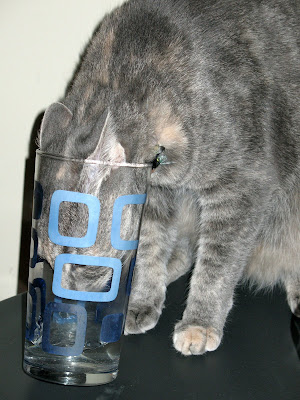 Notice that there isn't even any water left in that glass. (And please don't ask why I have not yet learned not to leave half-full water glasses out. It's for the same reason I only manage to hang my bathrobe on the hook intended for it maybe 20% of the time. The same reason, too, that my earth-friendly, reusable cloth grocery bags are more likely to be sitting on my kitchen counter than actually in the car when I make it to the grocery store.)

Anyway, I have this small-ish watering can that (theoretically) I use to water the one houseplant I've managed to keep alive for any period of time (a cactus -- I'm not so good at the regular watering thing). The watering can is one of those cheap-o metal IKEA dealies, and I left it out on the counter one night. Sometime around 3 am one night a few months ago, I woke up to a loud crash and then a bunch of clanking and thrashing. I turned on the lights and found Scout with her head STUCK in the watering can. Apparently, she managed to squeeze it in, but her ears got caught when she tried to pull it back out. The watering can was on the counter to begin with, but by the time I got downstairs, Scout had already fallen off the counter (The crash I heard) and was thrashing about frantically trying to free herself. As I was about to pick her up and help her, she crashed her head against the cabinets and -- oh yes, it gets better -- the top of the watering can popped off, so that Scout was now left with the lid part of the can stuck around her little head like one of those African tribesmen in National Geographic. You know, the ones with the crazy long necks and fancy collar-things. And from the neck up, she was SOAKED. Soaked in the way that makes a cat look like they're going to murder someone at the same time as they look utterly and completely pathetic. And, of course, the bottom half of her was completely dry, the water having been blocked by the lid of the watering can. I don't think I've ever seen an animal look so pathetic in such an utterly hilarious way. I got her loose as quick as I could, and I didn't even make her wait while I got my camera to record this for posterity. In retrospect, I kind of wish I had, though - It would have made a perfect holiday card. Or a LOLCAT. Scout could have been famous, if only I'd been a slightly more heartless pet owner.
Posted by ChrisC at 8:40 PM