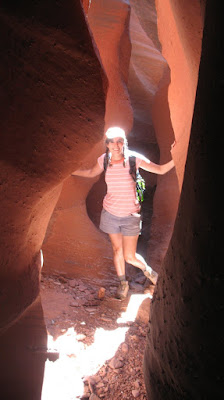 As usual, life has gotten hectic for me lately. I've been working some very long days, with few days off, and also dealing with some family illnesses (D's family, not mine). Plus, I've been, um, kind of obsessed with sewing lately, which always happens when I learn a cool new skill. I've spent most of my free time working away at lovely hand-sewn Christmas gifts for my whole family, so of course, this blog has been the thing to fall by the wayside. But I'm back! (Well, for today, anyway.) With a new installment of my vacation recap.

So when we were on vacation in September, one of the adventures we had was exploring slot canyons in Escalante-Grand Staircase National Monument. Escalante is in southern Utah, east of Bryce Canyon National Park and southwest of Canyonlands. The slot canyons had been recommended to us by multiple people both before we left home and as we chatted with folks on the road, and I'm so glad we took their advice. Slot canyons are scattered throughout the Southwest, where you have a combo of the right kind of rock and other conditions necessary to create them. Basically, they're very narrow canyons eroded into the relatively soft sandstone that's so prevalent in the area. I'm not entirely sure what makes the canyon erode out while the sandstone around it stays solid, but here's a great list of slot canyon locations.

To get to the canyons, we drove 27 miles down an unmaintained dirt road that was nearly washed out in places from recent rainstorms. You have to stop at the Ranger station before you even try to drive out there, just to make sure the road hasn't, you know, disappeared entirely. Thank goodness for my high-clearance jeep -- I lived on a dirt road as a kid, but I have NEVER experienced washboard as bad as this! The road's called Hole-in-the-Rock Road because it apparently ends 50 miles down at a place where some early Mormon explorers had to actually blast a hole through the rock to keep on going. Yeah, we didn't drive that far.

So once we actually made it to the parking area, we had to hike a mile or two down to the canyons from the parking area. First, we headed across the bright orange slick rock that is so ubiquitous in that part of the country. Since we were basically hiking down the sloping face of a huge rock, the trail was marked with cairns (stacks of rocks). Then we followed a (temporarily) dried-up riverbed between soaring sandstone walls for another mile or two. They get some CRAZY flash flooding in the country, and this is what the riverbed ends up looking like as the thick mud dries in the sun: 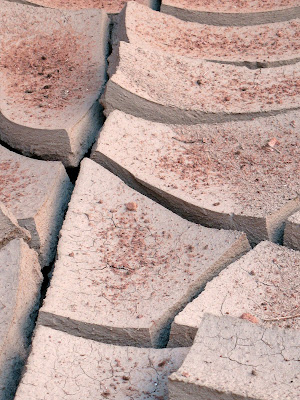 Isn't that insane? Some of the chunks of mud were twice as thick as my hand! It looks almost like some odd cinnamon-sprinkled dessert, doesn't it? Anyway, you have to check the weather before you head off on this hike, because you do NOT want to be stuck in this riverbed (or worse yet, the very narrow canyons) if it starts raining hard. People die every year in flash floods, apparently. Scary.

So anyway, you hike down this river bed until you get to the entrance to the slot canyon, which is basically just a slit in the rock walls. Here's a picture of Dan in front of the entrance to Spooky Gulch: 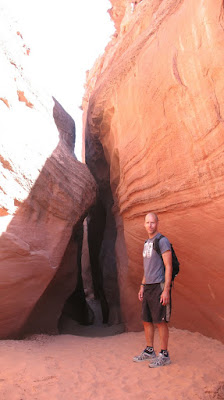 So you start heading down the slot and at first it's narrow, but not crazy narrow. Except then it starts to get more and more narrow, and you can see less and less of the sky. This is a view looking up from the floor of the canyon: 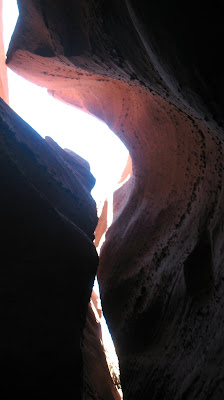 I'm not especially easily frightened by stuff like this, but I have to say that I did start to get a little freaked out as we got deeper in. In places, the canyon gets REALLY narrow. Like, so narrow that you have to take off your day pack to squeeze through. And your front and back are STILL both brushing against the walls: 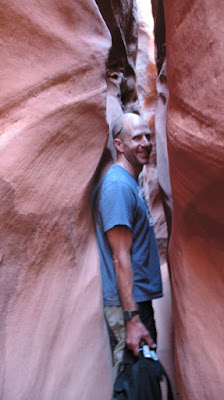 Plus, I just about put my hand down on a rattlesnake taking a nap on a ledge when I went to pull myself up. (Don't worry, mom, we turned around at that point!)

So, as you're wending your way through the canyon, you really start to see why they call it Spooky. And, of course, it didn't help that my lovely boyfriend kept on jumping out from behind curves in the rock and doing things like this: 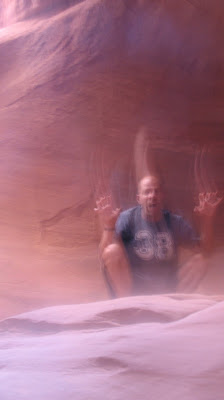 But despite the spookiness, it was amazingly beautiful: 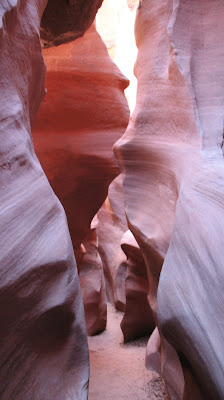 Look at the color of the rocks! And the sinuous curves. So lovely. In the end, it was totally worth the 27-mile filling-rattling drive, the hike, and even the slight claustrophobia. Definitely something not to miss if you're in this part of the country.

(I should add, there's another slot canyon in the same area, Peekaboo, which is supposed to be equally spectacular. However, we weren't able to get into it the day we were there. You normally have to wade through a shallow puddle and climb about 10 feet up rock wall (which has footholds dug into it) to get into Peekaboo. Challenging, but do-able. But because we were there soon after a huge storm, the shallow puddle was closer to thigh-deep, with the stickiest mud EVER underneath the water AND the ground was so washed out that the climb was closer to 15 feet, with the first foothold above my head. Oh well. Next time, I guess)
Posted by ChrisC at 7:39 AM 1 comment: Links to this post